We didn’t know what to do with the dirt patch in the back of our backyard, so we decided to create a free mini golf course!

We’re all settled in to our new home. There, thankfully, wasn’t too much of an adjustment period. But we’ve been insanely busy since moving and haven’t been able to get many projects done. The kids are getting old now, which also makes some projects more difficult as they can get in to everything now!

There’s a nice size grass patch for running through sprinklers, playing on different toys, and playing games. The hill that spans the entire backyard which is great for climbing and exploring.

There’s even a nice flat space on the hill for us to have a small garden. It’s no where as big or pretty as the garden at the old house, but with some time and effort, I have no doubts we will make it something extraordinary.

There was one spot in the backyard though that I just didn’t have a vision for. There is a dirt pit in the far back corner that I had no idea what to do with.

It is underneath eucalyptus trees and a loquat tree and so the leaves in this area were piled quite high. Under the leaves was a layer of rubber mulch. I have no idea what this area was used for, but we’ve been kind of at a loss for what to do with it.

I thought of maybe turning it into a dirt pit like we had at the old house, or a natural playground, but hadn’t really decided on anything particular.

That was until we were walking through Target and the kids found golf clubs in their dollar section. We brought them home and started playing with them and I knew we needed a free mini golf course!

How to Make a Mini Golf Course

When we go camping at the KOA they have mini golf courses that the kids love. And their courses are so simple. I knew we could make something similar for almost no money.

We started by cleaning out the dirt area. Raking all the leaves and removing all the rubber mulch. Then we took a long piece of wood a 1×1 and used it to level out the top of the dirt by dragging it over the dirt.

Once we had everything fairly level we started creating our mini golf course. I didn’t want to buy anything new, so we used things from around the house and yard that could be used to create a maze and section off the different holes.

We decided to make 2 holes and split the dirt area in to two different sections. There was a random metal pipe in the middle of the dirt pit, so we made a planter in the center using edging that had previous been used to separate the dirt and grass areas. There were stepping stones in a different part of the yard that we used in between the dirt and grass instead.

Then we took the edging and created a blockade so that the ball couldn’t leave the area. I used plastic cups that we already had, drilled holes in the bottom so they wouldn’t fill with water, and buried them in the dirt to make our holes.

We have lots of rocks and logs and branches in our yard. So we rearranged some things off the hill and utilized them as decorations or to create different mazes on the course.

I really wanted there to be a tunnel. So I took a plastic Clorox wipes container, cut the bottom off, and then cut it in half. I wedged it between two of the edging pieces. Now we have a little tunnel to try to shoot the balls through.

The course turned out so cute! The kids love it. It really didn’t take that long to put together. And it’s like a mini golf course and a natural playground.

The kids hop from the rocks to the edging to the stepping stones and back again, pretending the dirt is some kind of sludge or quick sand. Then they’ll rearrange all the logs and branches and run through them like an obstacle course.

And of course, we also all use it as a mini golf course.

I love that it has so many different uses and that it’s not just a useless dirt pit anymore. It probably won’t stay like this forever, but it’s perfect for right now. 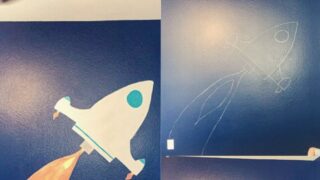 ← Previous
How to Paint a Mural in a Child’s Bedroom
Click here to cancel reply.