This weeks theme is long exposure. When I planned out my year for what photos I would be taking, I tried to plan it around things that I knew would be going on that week. We planned a camping trip back in August and so I knew we would be at one of my favorite locations this week with the whole family: Carpinteria State Beach.

When I was younger we used to go camping here quite often and when my husband and I found out we were moving towards Ventura, I was so excited because we would be closer to Carpinteria. I knew I wanted to take a long exposure photo of the night sky. I know there are other locations that you can see way more stars, but when I was younger I used to sit out at night with my dad and I remember thinking how beautiful it was and just the vast amount of stars that there were.

A long exposure photo is when you take a photo and keep the shutter open for a longer amount of time to let more light in. For instance, when I’m shooting a portrait session or little kids or sports, you want the shutter open for a fraction of a second so as not to get motion blur. For this photo, I left the shutter open for 1 second. I didn’t bring my tripod (which was a packing oversight since I knew I wanted to get this photo) so I had to hold the camera, which means I couldn’t go much longer than 1 second without my hands getting too shaky and ruining the shot.

My mom and I went out walking onto the beach in order to get this photo. The moon was almost full and it was a little cloudy as you can see in the photo. It was also really windy on the beach, which made it even more difficult to get a steady shot. Because the moon is so full, there’s not quite as many stars out as there could be. I would have loved if the moon would have been smaller that night, but I love the way the haze is lit up and that you can see the stars shining through underneath it. 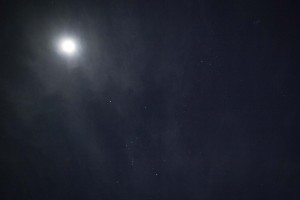 Look for my post in the coming weeks with a little bit about our camping trip and some of the amazing sites we saw.

This part of an ongoing project, where I will be posting one a week. You can see all my posts for my 2015 Project 52 here.

« Sammie Jeep Shoot
Project 52: Week 10-Something that caught my eye »

Welcome! I'm Amy. I am a wife and stay at home mom to two kids and trying to build my empire during naps and nights when my husband is home. To keep my sanity, and stay on budget, I create DIY crafts for the kids, home decor, and gifts. If I'm not sleeping, hanging out with my kids, or working, you can find me binge watching "The Office" reruns with my high school sweetheart, John.